In this regular feature, we ask Canadian freelancers to share a few details about their work habits and their strategies for navigating the ups and downs of freelance life. 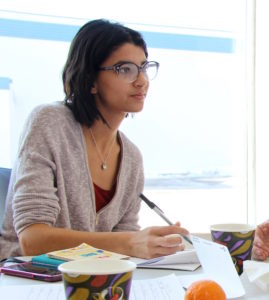 Ayesha Barmania is an independent journalist, radio producer, audio artist and podcast consultant based in Peterborough, Ontario. They’re the co-host and co-producer of the Peterborough Currents podcast, which was recently nominated for a 2019 Digital Publishing Award.

Ayesha took the time to speak with Story Board recently about setting your freelance rates, the advantages of working on passion projects, and the importance of mentorship for emerging journalists.

Q: How did Peterborough Currents come about?

A: I live in Peterborough and I was involved in community radio here for a number of years and still am. I was working for CBC Toronto but still was living in Peterborough and pitching a lot of Peterborough stories to CBC and some were getting picked up, but then it hit home for me that there wasn’t really a dedicated current affairs radio or podcast program for the Peterborough area.

So I used some resources with community radio and started this as a podcast called Peterborough Currents. There are all these amazing stories in our community but no one is publishing them as long-form docs. So my co-host Will Pearson and I decided “why don’t we do it?”

Q: We’ve lost so much local journalism over the past few years…

A: Yes, that is really where it comes from. In Peterborough especially, and I think it’s true across Canada, we have one daily newspaper and the local pages are super thin. And in particular with radio there’s just nothing, and no one seems to talk about it. So we just wanted to step up a little bit.

And it is an issue because we don’t get any funding, really, for it. There’s not a lot of money first of all for podcasts, second of all for local news. So that’s one challenge, is generating money for an independent project.

There’s been some interest in the community for sponsoring it. So that’s something we’re working on developing. But it’s not something that’s all-consuming for us. We’re more focused on telling good stories and getting good people involved and making sure we’re getting some episodes out on a semi-regular basis.

Q: What are you focused on with your other freelance work at the moment?

A: Right now podcast consulting is my main freelance gig. I’ve been finding it’s a lot easier to negotiate consulting contracts than documentary and production contracts. So I’ve been leaning into that because it’s the path of least resistance — the pay is a lot better.

I’ve worked for community radio stations that are developing podcast policies. So I’ll go an do some strategic planning with the team and talk about their goals for this podcast program, talk about best practices, getting everyone on the same page of how podcasting works and what’s the best way to go about this, and then working with them remotely to flesh out the policy or the program.

So I’m going in, I’m doing the same kind of strategic planning and podcast education but then I’m also guiding them along the steps to making a podcast episode. So we’ll talk through the idea, who’s the guest, where are we going to interview them, what other elements are we adding to the episode, planning out some interview questions, doing some coaching with the host, teaching audio editing skills and being there and stepping in when they need help but mostly just teaching them in a hands-on way how to make podcasts.

Q: What advice would you have for someone who wants to get into this kind of work?

But I think for folks who want to get into this kind of field, it’s important to take up the opportunities to lead planning sessions, lead meetings, get involved with a not-for-profit board and get that experience at the table. But also get some teaching skills — get out there and try to share your knowledge in a way that helps people build their own capacity.

Q: What have been your biggest challenges as a freelancer?

A: Biggest challenges have been trying to negotiate freelance contracts and just having to walk away from arrangements that felt exploitative.

And I haven’t been doing this for very long but I made a decision and drew some lines for myself. I want to own the copyright to my content, and I want to pursue stories that I’m interested in. So those are the reasons why I wanted to freelance.

And so one of the biggest struggles is bumping up against clients who aren’t understanding of that. I’ve pitched a couple of freelance stories and found the rates weren’t that good and they also wanted to own the copyright to it. And I had to walk away from that.

I’m still pitching and still producing but I’m getting more and more discouraged by the pitching side of things and negotiating production contracts.

Because the terms are so unfavourable and it’s such a headache and it takes so long. And then ultimately to have to walk away and not get paid for any of that labour makes me think maybe I should focus on something else.

Q: What do you think is needed in terms of support for freelancers?

A: I think some support that might help for a producer who’s just getting started in freelancing would be mentorship opportunities from other freelancers who can walk them through some of the boring and tedious aspects of freelancing — like the contract negotiations and what rates to charge and things like that.

Because I think there are a number of mentorship opportunities available that are really wonderful for teaching you the production skills, but I think the stuff that is pushing people out of the field like the contract negotiation could be an area that could be better supported with more education and one-on-one mentorship. And in cases where there are production mentorships maybe a complementary CMG Freelance mentorship to kind of round it out.

Q: What’s your approach to setting your freelance rates?

A: I have a calculator that I use. I’ve made an Excel spreadsheet and I plug in various factors. Mostly it’s just however many hours I expect to put into any given contract or assignment. So I’ll factor in some admin time, some on-site time, travel time, production time. And then it comes up with a number based on a couple of things I’ve programmed into it.

And that’s a really helpful thing for me to have. Because with clients often there’s a pressure to give them the lowest number you can sustain, and then you don’t make any money, really. You’re earning less than minimum wage in some cases just because you haven’t factored in how many actual hours you’re putting into this and how much you want to make.

So I can say when I’m giving a quote “here’s the number than my calculator came up with.” It’s clear that I have a method to my madness and I think saying that helps people wrap their mind around the fact that this is a legit number.

This is something I do for my consulting clients. And it’s one thing that’s pushed me towards consulting more than the production side of things, because giving my own number when I’m trying to negotiate a documentary or something like that doesn’t go very well, usually.

And in situations where the number that I came up with was a lot different than the number they were offering — for me it’s sometimes a matter of putting my foot down and saying, well, it’s just not worth it when I can do these other things that will pay me what I’m asking for and what I’m worth.

Q: Making these kinds of decisions as a freelancer is complicated…

A: Yes, and even if I don’t ultimately use that number that my calculator came up with, coming up with the number just so I know what it’s worth and what compromise I’m making is important — knowing that I’m compromising 30% of the figure that I came up with and deciding if it’s worth it.

One other thing that’s tangentially related is that I’m now looking at more arts grants to fund production of documentaries. I also straddle a line between doing audio art and journalism. So I’m looking at getting more of that artistic funding to get projects off the ground.

My plan is to get arts grants, make docs and then license them to clients or whoever wants to buy them, so that I can retain the copyright and ownership, which is really important to me, and also to make sure I’m getting the value of my labour.